Busy busy day yesterday, work was just go go go, followed by get home and go out.  As with our last home, Mattamy sets up what they call Mattamy University, in which they invite all the home buyers closing at the same time / in the same area to come together and do a meet and greet with the build team.  They cover stuff like warrantees, the construction process, closing day, and stuff you have to take care of (I know have a "oh yeah" list to follow up on that looks like a list of bills (Hydro, water, gas, phone, etc.)  As a group, the Mattamy team are not strong public speakers, which having met many of them one on one over the course of the build know most of them to be gregarious constructions types, and in front of the mike they become monotone nervous speakers.  I suppose that's just anecdotal evidence that fear of public speaking seems to affect most people.  In any respect I'm glad they are skilled and competent home builders, and being able to communicate that comes second.

From the session we learned that the park behind our will be built before the end of the summer, will be very similar to the one near Bryan's baby sitter (which is a nice one) and will have a trail that connects it up to other stuff near by.  Its actually kind of funny, the similarities in location between this house and my parents.  Backs on to a trail, the brick and trim, and a few other little things, not the least of which is the exact same kitchen appliances :P

Okay since this is actually a real(TM) blog post, and my stomach insists on being heard, I really wish I hadn't left my breakfast on the counter this morning :(

So what else, oh yeah, most important we met a bunch of the families in our neighbourhood, there are lots and lots of kids around Bryan's age, so it is going to be a super fun street for Mr B to grow up o.

<< why is Streetsville go station a cell dead zone, he asks as his internet connection dies. >>

So yeah that was Mattamy U in a nut shell, um, we don't get a tree on our lot, but we get some trees and shrubs at our back fence (on the other side.)  Our back deck may not be built until after our grass goes in, so no going out the kitchen door because that first step is a doozy.

As for the actual house, they did a lot of painting and finishing yesterday, and all the cabinets arrived, they are all shrink wrapped in the family room, and our bedroom, but they are there.  When I got their and started taking pictures I was ducking around all the painters, just trying to stay out of the way, I had an amusing conversation that when kind of like "Hey are you the guy to install the cabinets", "nope, just the soon to be home owner," "oh, well there in the way."  Typed out it is boring sounding, but it was funny at the time. 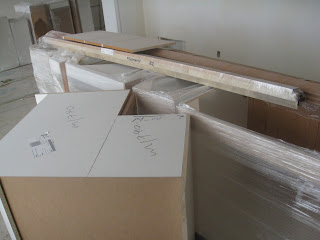 So after all that chaos I got home, and got down to work :( we are headed out to our suprasecret test lab soon and I had to get a bunch of stuff documented so it could be sent there, and it needed to be done.  I write these release docs pretty regularly, so much so, I think I wrote yesterday's on auto pilot, and it still might be the most error free one I've written to date.  For some reason I'm not able to create them flawlessly, but I'm getting better.

So thats why no one heard from me yesterday, it was go go go.