Scarborough Bluffs at the Dakota

So for those following the twitter stream last night, you know that I was out at watching the Scarborough Bluffs (also know as the Barenaked Ladies,) but what couldn’t be conveyed was why the experience was so awesome. As I understand BNL is in the studio right now (well not now now, I imagine they are in bed now now, but like temporally proximate to now,) putting together their next album minus one. With Stephen Page off doing his own thing now the group is trying to re-establish their identity, reassure fans, and maybe even reassure themselves that they can pull this off.

So what better way then ask a friend and small indy music club owner if you can annex his bar for a night, invite only your family and closest friends, and then play all your new music to your most supporting audience, and get probably the most honest feedback. Now there is no way on earth that I should have even heard of this concert, but Trevor, who is always introducing me to new music, happens to know the owner of the club, and Trevor got himself +1 on the bottom of that guest list for last night. He also may have let it slip to Brad that the concert was last night so he could line up before the doors open to see if he could squeak in there as well (which he did.) So BNL, 110 of their family and friends, and eight of the luckiest friends and +1’s of the bar owner (which Brad, Trevor and I included) got the most intimate BNL concert that I will likely ever have.

To put this on a scale, it was like I was sitting on my living room sofa, and they were playing in my kitchen. They played two 10 songs sets, and an encore, in there they did 16 brand new tracks, and a half a dozen classics. Between the songs they mingled with the crowed as you would a family gathering, and I’m afraid I could not drink enough liquid courage to be that crass fan that shoves himself in the face of the ban and gushed about how awesome they are. Instead I will go with my more Canadian story, as I returned from the bar, hands full with a round for our table, I had to squeeze past Tyler, and with a polite excuse me I captured his attention, to which he politely with nodding deference to the hand full of beers stepped out of the way.

The “new sound” is reassuringly like the “old sound” they lacked the polished perfection of a studio album that I’m sure will prove that these guys still have it. Still the honest sound, with flubs, and in-between self deprecating banter is what makes these guys quintessentially Canadian. I’m really excited to get a hold of the album whenever it is ready, but I think my own apprehension, as a fan, has finally been relieved, these are guys who still make music I find compelling.

Well I don’t have any more to say now, but I am tired, I don’t think I got in until 2:30 AM last night, but it was worthwhile, I will post what sketchy pictures from my cell phone I can tonight, and I will see if Brad will share his pictures from his significantly less sketchy camera.
Posted by Unknown at 9:37 am 1 comment:
Email ThisBlogThis!Share to TwitterShare to FacebookShare to Pinterest
Labels: music

2009 Heart and Stroke Ride For Heart

Hey folks that Bryan picture was just a teaser. I'm far far behind in my fund raising efforts, but work has been an absolute zoo, so here starts the 2009 Heart and Stroke Ride for Heart Fund Raising Kickoff! So please, before I get all begging and pathetic, please donate to the Heart and Stroke Foundation.

This year both Erin and I will be riding. Bryan, probably won't be, but just because I think 2-3 hours being dragged isn't up his ally (yet, next year though.)

Erin will be riding the 50, and had her first big ride this weekend, not sure if she can walk yet, but she mastered 26 with aplomb. I will be doing the 75 because I said I would, and foolishness before pride any day :)

It also looks like Erin and I will be riding in good company, with Emma, and Chris Bardon, and Brad and Jodi.

More posts, and emails will follow, you have been warned :)

Donate
Posted by Unknown at 8:31 am 1 comment:
Email ThisBlogThis!Share to TwitterShare to FacebookShare to Pinterest
Labels: bike, charity

Asleep at the wheel 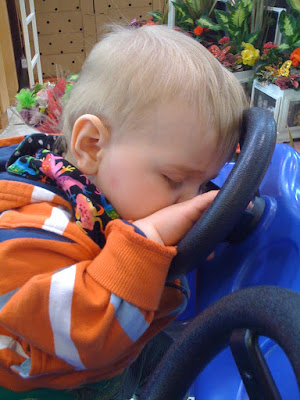