Checking the inputs...
Posted by Unknown at 9:03 pm No comments:
Email ThisBlogThis!Share to TwitterShare to FacebookShare to Pinterest

I just saw a Dinosaur... Attacking My Cat!

And I used augmented reality to bring him to life! I took this photo with the app "ROM Ultimate Dinosaurs", free from the App Store. (He's part of a dino exhibition - more at www.rom.on.ca/dinos.) 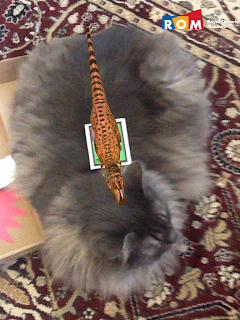 sent on behalf of Geoffrey Peart by the Modrons who plumb the tubes of the interwebosphere..

Posted by Unknown at 1:49 pm No comments:
Email ThisBlogThis!Share to TwitterShare to FacebookShare to Pinterest

I've been toying with an idea of late, every time I see a car driving aggressively or erratically, just the needless risk taking that jeopardizes other motorists and pedestrians. The idea that some how when we get behind the wheel of our cars we dehumanize everything on the road, taking for granted that in those other cars, and walking down the road are sentient human beings, regardless of age, each one is precious and irreplaceable.  We only have a finite amount of time here, and I plan on making the most of it, and I really don't want some ones urgency to get to the drive thru for coffee to put that at risk.

We all have seen the ageist little signs that enshrine the specialness of having in your vehicle an infant, and I've considered, what one internet denizen has already published here, and I've copied for illustration putting a sign like this on my car:
Where this once in a blue moon blog post has surged from, is not the callousness or crazed behaviour of drivers, but the reckless, and sociopathic disregard for human life shown by two idiots at a block party last night.  It was the lead story on the CBC this morning, and the splashed all over the Toronto Star.  The police cheif's made a statement, with shock and weariness in his voice that this was 'the worst incident of gun violence ever' I think he left it qualified 'in North America.'

I find myself, with some caveats agreeing.  The caveats, and I think he meant them as well, is that this isn't to lesson or take away from horrific crimes which have occurred with guns, the Montreal and Columbine shootings for example.  Those were horrible crimes, which involved fire arms, but were premeditated.  This was a crime that was the kind of spontaneous* violence that occurs when people stop considering each other (and likely themselves) to have any value. It is the reckless and thoughtless decision making without a care for consequence or society.  It takes an iota of self work and conscience to say "I'm in a crowded place lets take this some where else.  Never mind the more sophisticated processing that says "This just isn't worth fighting about" and walking away..

This isn't a cry for gun control** but a plea for some humanism, humanism in the street, in the car, and in life.  Recognize the people around you as people, recognize yourself as a person, and realize that the golden rule is as relevant a rule today as it ever has been.


* not with standing the premeditation that occurs when you strap a loaded hand gun on and go out in to the public, you obviously mean for it to be there for some purpose?

** I really don't see why people need the right to own a handgun, I'm sure they are fun to target shoot with, but the hand gun is really a single purpose item, it is design for compact people killing, and target shooting is just practice for the real thing.  Long guns are more general purpose, and difficult to conceal.  They have clear sporting value, and permit the enjoyment of marksmanship as well.  That all being said, I do realize that the majority of handgun crime is done with illegally owned handguns, and that out and out banning of handguns wouldn't necessarily solve the problem.  It is too bad ammunition can so easily be manufactured in the home, otherwise Chris Rock's approach to ammunition control might work.

Posted by Unknown at 9:49 am No comments:
Email ThisBlogThis!Share to TwitterShare to FacebookShare to Pinterest
Labels: car, cars, guns, life, rant

Today Bryan saw some flies and wanted to get a closer look at them, so mommy caught them and we put them in the bug jar. Then Bryan made a pipe cleaner fly, and Evie and Bryan coloured flies pictures. 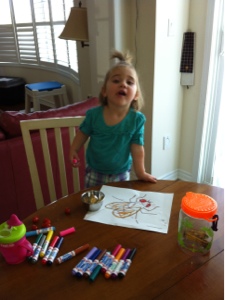